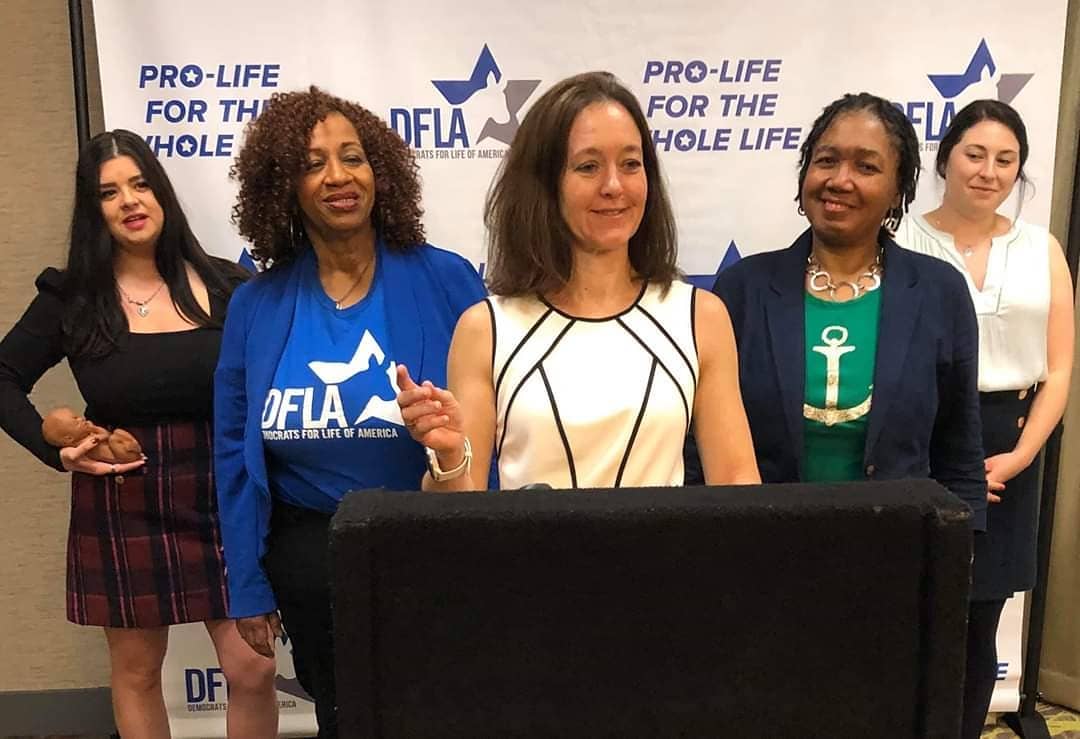 We exist to help pro-life Democrats win office and pass laws that are Pro-Life for the Whole Life.

What does Pro-Life for the Whole Life mean?

Although abortion deserves special consideration as the most striking violation of human rights in the Democratic Party platform, we support the Consistent Life Ethic. This means that we are opposed to any policies or actions that undermine the value of human life.  Specifically, we focus on five areas: opposing abortion, opposing assisted suicide, opposing the death penalty, improving healthcare, and taking action on systemic racism.

The Consistent Life Ethic means we strive to be consistent in the stances we take. It doesn't mean diminishing the critical importance of abortion as a social justice issue. We never endorse pro-abortion candidates.

Never. DFLA has a strict policy in favor of only endorsing pro-life Democrats. We never endorse Republicans and we never endorse pro-abortion Democrats. The right to life comes before all other rights. The Democratic Party is traditionally the party of the underdog, but that claim wears thin when not applied to pre-born children. Science has abundantly proven the humanity of the unborn.

Why don't you leave the Democratic Party?

First, human rights should always be a bipartisan issue, and human rights for the preborn will never be protected as long as only one party views this as an issue. Pro-life Democrats have been critical votes in states across the country in favor of pro-life legislation, including and especially Louisiana.

Second, we believe in Democratic values: equality, non-violence, and non-discrimination. We hold to traditional Democratic beliefs: a strong social safety net, action on the environment, worker's rights, and a bold stance against systemic racism. These are precisely the same values that make us pro-life.

Third, we believe that the Democratic Party can be stronger if it abandons the extreme pro-abortion stance in its national platform. A large part of Republican dominance in the South is due to their successful messaging on abortion.

Why don’t you join a third party, like the American Solidarity Party?

America is and always will be a two-party system. There are more than 100 elected pro-life Democrats in this country who are working right now to bring change to this country. The number of elected third-party politicians is negligible.

How many pro-life Democrats are there?

Congress has a handful of pro-life Democrats, and a few others with mixed voting records.

Does DFLA want to address the root causes or actually provide legal protection to pre-born children?

Both. The right to life is a pre-eminent social justice issue: it deserves a multi-prong strategy. This includes cultural change, a stronger social safety that eliminates some of the push factors toward abortion, and legal protection for pre-born children.

We want solutions that work for both women and pre-born children.

Is DFLA just a group for conservative Democrats?

No. Only a very small proportion of our members identify as conservatives. Pro-life Democrats, such as Robert Casey Sr., Hubert Humphrey, Dan Lipinski, John Bel Edwards, and Katrina Jackson have been on the forefront of immigration reform, healthcare advances, and the civil rights movement.

Most of our members identify as progressive, liberal, or moderate.

No. A majority of our members are women.

No. Only a minority of our members are Catholics. Our board includes a pro-life atheist as well as a Jewish Rabbi. DFLA was supported by the late Nat Hentoff, a Jewish atheist, and Rachel MacNair, a Quaker.

Democrats For Life of America
The Pro-Life Voice of the Democratic Party
Phone: (703) 424-6663
info @ democratsforlife.org

Copyright 2002-present Democrats of Life for America. All rights reserved.